You are here: Home1 / Tips & Tricks2 / multiple fuel tanks, how does the return line run?

multiple fuel tanks, how does the return line run?

multiple fuel tanks, how does the return line run?

It happened to me on a deliverytrip from Brest, France to Hellevoetsluis, Netherlands. Read the full story: seayousailing.nl/brest-france-to-hellevoetsluis-netherlands

We were sailing along the south coast of England, somewhere around Dungeness, when suddenly the engine stalled. Naturally, the first thing you check is the fuel level. Well, according to the gauge, the fuel tank was completely empty. No need to check further.

However, the thing was that this could not have happened. When we left Brest, we had enough fuel to motor all the way to Hellevoetsluis if necessary. We had been motoring most of the night because of the thunderstorms that kept coming over us, but that could never have taken that much fuel.

Sabi had two fuel tanks, a main one on the keel and a smaller one under the bed in the aft cabin. We were running on the smaller one.

After consulting with Tom, the owner, we soon found out what had happened. He sent me this foto of the tanks when he had left the boat for us. While tank 2 was now empty, according to the gauge, tank 1 appeared to be fuller now than when we left. The return line from the engine ran to tank 1 and not back to tank 2. 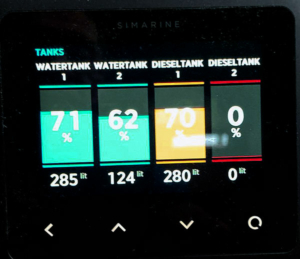 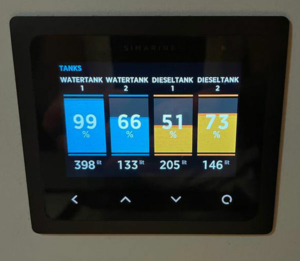 A fuel pump always operates at full power to provide enough fuel for when you would want or need to go full throttle. Any fuel you don’t burn when not going full throttle runs back into the tank via the return line. The other tank in our case. I normally never really run the engine over 18000 rpm.

So what happened was that we had pumped much of the fuel from tank 2 over to tank 1 while motoring at an easy paste. Normally Tom for that reason keeps an extra eye on the gauges and switch on the dedicated pump to fill tank 2 from tank 1 when needed.

Anyway, the problem was quickly solved, flipped the valve to tank 1, bleed the engine bleed and on we went.

Every day is a school day
Scroll to top