Navigating on the stars; never sail without a paper chart!

Hugh, the owner and I took the ferry from Hoek van Holland to Harwich and went from there further on to Ipswich by train. At around 9:30 pm we arrived at Gräfin and after dropping off our gear we had a drink in the pub nearby. It turned out to be the weekly rehearsal night of a local singing group so we had some nice entertainment.

Next day we checked the whole boat, picked up some bits and pieces at Fox’s Chandlery and filled the diesel and water tanks. We then sailed down the river to Harwich. There we sailed for a bit to check out the sails and stuff. Everything looked really great! Except for the depth and speed sounder that is. The depth sounder couldn’t make up his mind, kept flipping on and out. The wheel of the s

peed sounder was running free but showed nothing on the clock. We had decided to stay the night in Historic Harwich, have a nice dinner and a  good sleep before leaving for Numansdorp next morning at 6 am. 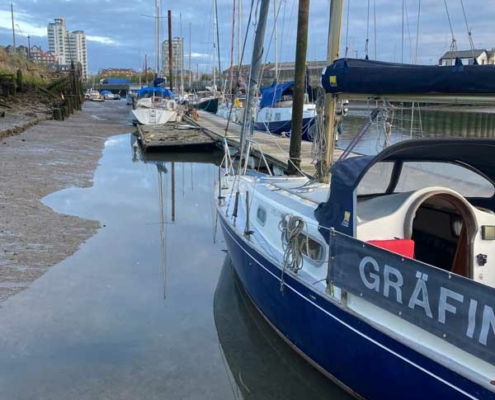 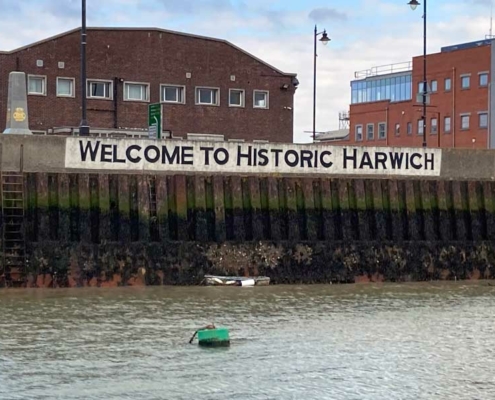 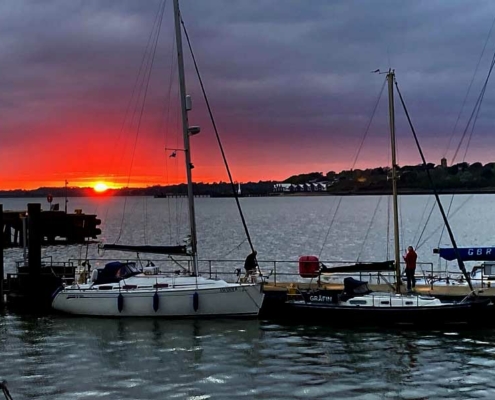 We left as planned but shortly after we left the winds had decided to have a change in plans. Instead of the forecasted Northerly 10 -12 kts. it was more to the Northeast dropping to 5 kts. Never to pick up again the entire weekend.

Our Friday sail trial would be our one and only real sail. The rest of the trip we motor sailed. That’s at best. We ended up dropping the mainsail as well. Still, it was a fun trip. A little cold but we were prepared for that.

Later that day, around 4pm, I noticed that my laptop that we were using for navigation had turned itself off. It was powered by a small inverter on the 12V outlet. The inverter gave a low battery warning and turned itself off. That was weird, we kept the engine running all the time and should have enough power to keep the battery charged.

We decided not to use the autopilot anymore and to give the engine some time to properly charge the battery. If we had to hand steer for the rest of the trip, fine, but we’d like to get the laptop up and running again to see where we are and where we’re going.

It turned out differently. The battery still did not charge. Rather, it kept losing volts, with only the radio and a small Raymarine RC400 plotter on. That didn’t look promising. We plotted our previous log entries on the paper chart and made sure we were ready to navigate the paper chart should the Raymarine stop operating as well.

This little device eventually was the last one we lost but hey, it also had 4 AA batteries that gave it the last bit of power. First we lost the radio. Luckily I had my handheld VHF with me, so it was fine with that. I had to keep it turned off until we needed it because of course we couldn’t charge it. We checked the navigation lights… nothing ☹ That didn’t feel right, but we couldn’t help it. The battery had dropped to 5V and that was it.

With the last bit of daylight we filled the diesel tank with the 10 L jerry can. Without wind and without navigation lights, the worst scenario would be to run out of fuel too! Much to our surprise, we only used about 8 l  Well, that was good! We certainly had enough diesel to get us across motoring.

An hour or so after sunset, the Raymarine also ran out of juice. We had already noticed that the analog compass showed quite a deviation on some courses, between 25 and 35 degrees. It didn’t seem like an instrument to rely on. Also the instrument lights didn’t work, so we couldn’t see anything anyway. Fortunately it was a very clear sky and bright stars. Polaris was clearly visible and with Cassiopeia’s help we were able to steer 110°, the course we had plotted on the paper chart. Every few hours we checked our position with my Garmin in reach I recently bought. Actually, this was the first time I used it. 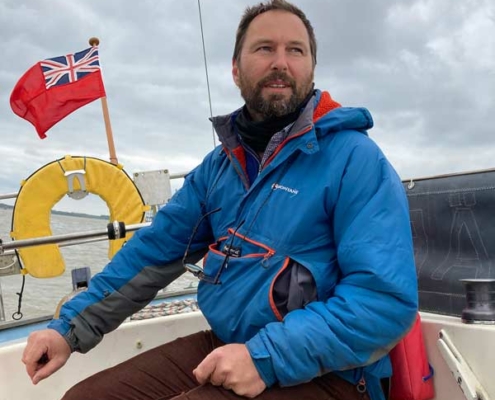 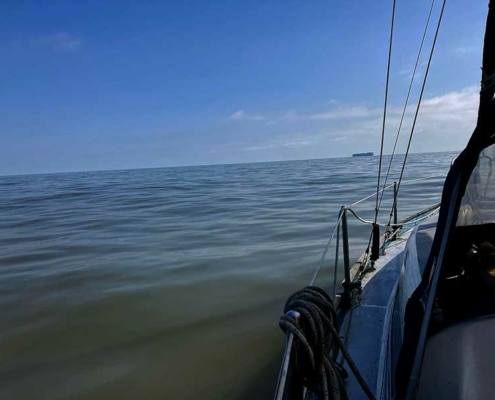 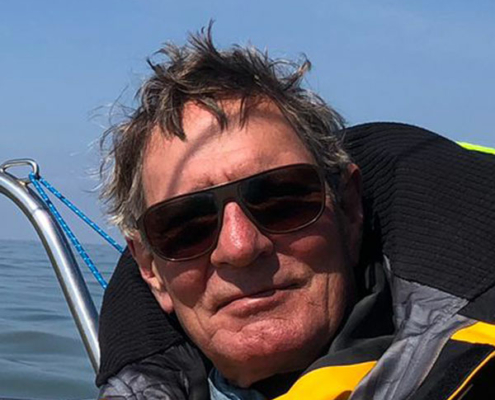 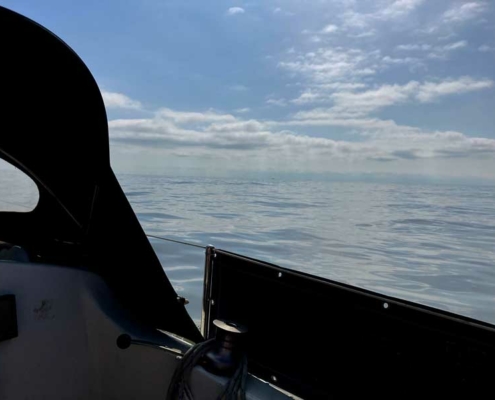 Shortly after sunrise we had a distant visual on the chimneys of the Maasvlakte so the rest wasn’t hard at all. Around 12:30 we arrived at the lock and half an hour or so later we were in the Haringvliet. The Haringvliet is great for sailing, but it is a bit shallow in some places. A (working) depth sounder would be a useful instrument. As we sailed down to Numansdorp the wind finally pricked up a bit and we set the genoa. With only 3 nm to go, I obviously steered a bit to close to shore and we ran aground.  Shit!

It’s only sand so there was no worries about any damage but still we had to act quickly otherwise we were really stuck. There is no tide in the Haringvliet so no waiting for high tide. We managed to turn the boat into the wind with the engine. Then we set the genoa and with help of that we managed to point the boat to deeper water and the engine did the rest. After half an hour or so we were afloat again.

Finally at around 6 pm we reached Numansdorp to find Lex waiting for us on the pontoon with a very well appreciated cold beer. SUPER!!

It was a fun trip! Eventful, even though not much had happened. Basically the only thing what happened was the battery that broke. That had its consequences but very well manageable. Sailing without nav lights obviously is not done, and nobody could have seen us. Still, as long as we can see any other vessels, there is no immediate danger.

Sailing wise, the best part was the trial sail before we actually left. I have never seen the North Sea so calm for so long. The good thing is, it taught us that the engine is very reliable and VERY efficient. Last but not least: this trip showed again that you’d NEVER SAIL WITHOUT A PAPER CHART!! 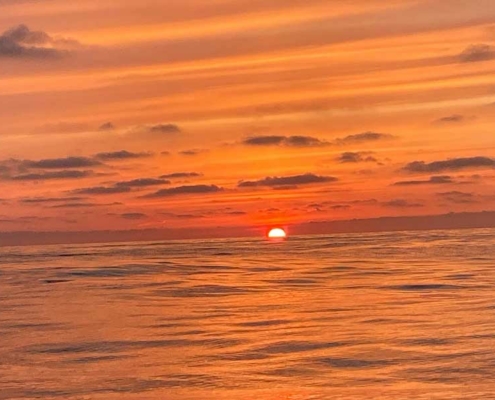 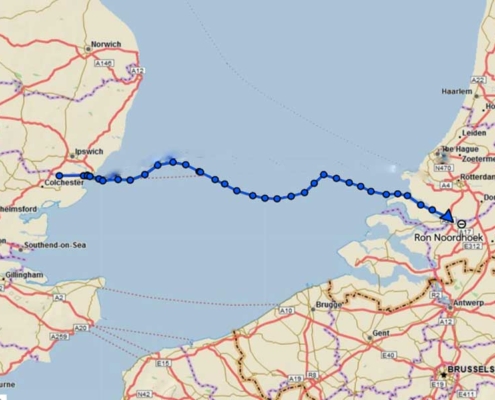